Updated map for Fire & Sword in the Sudan 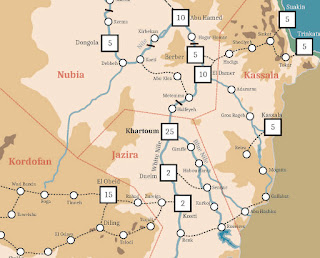 Steve Winter's Fire & Sword in the Sudan which used to be available on his Colonial Angle website is a very ingenious set of campaign rules where the players are pitted against Mahdist hordes which are automatically generated.

Its only drawback is the fact that the original map was a very lacklustre bitmap image put together using Paint and was crying for an update. Below is a download link to a vector-based graphic update of Steve Winter's original map. The only change that has been made is to name all the map's locations (including funky period spelling in some cases) and change some of them.

Also available is a slightly modified map variant developed by the Auckland Wargaming Club, along with a PDF of the original rules. The original map is also included for reference.